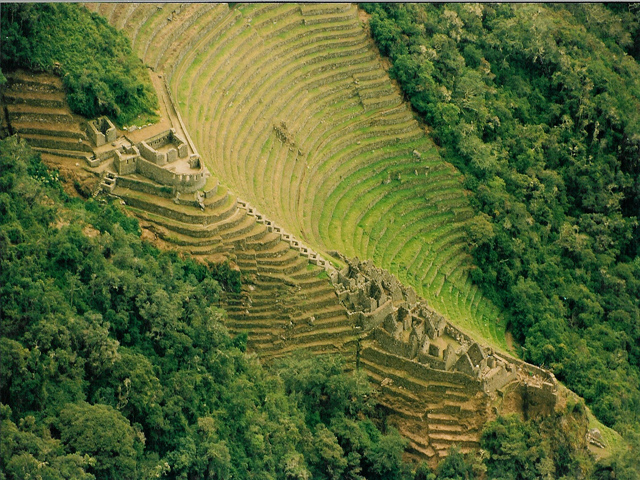 Arrival, Asistance and transfer to the selected hotel.

In the afternoon, a city tour within the archaeological capital of America and its nearby ruins known as:
Qenqo, Puca Pucara, Tambomachay and the Fortress of Sacsayhuaman.
Return to the hotel and overnight

Breakfast. Excursion to Historic Santuary of Machupicchu. Transportation from hotel to train station. We begin our trip to Machupicchu which lasts three and a half hours by train where you can feast your eyes on the vegetation of the area going up the high mountains which form the Urubamba Canyon.
We arrive at Puente Ruinas Station (Aguas Calientes) where we take the tourist buses that take us up along the 8 km. road to the Machupicchu Ruins Hotel. The control at the entrance of the Inca City is near the hotel.
The guided tour to the archaeological complex begins at a path starts at the bus stop, we go through some rooms near the peripheral wall. Later we walk on a path to access the agricultural section and then the urban area.
Machupicchu, is located 113 km from Cusco and at 2350 m.a.s.l. It is in a sub-tropical area with an average annual temperature of 13°C during the day. There are two clearly defined season: the rainy season from November to Mach and the dry season from April to October.
This Inca city was discovered by Hiram Bingham on July 24th, 1911, in July 7th, 2007 was announce one of the seven new wonders of the world.
This archaeological complex is divides in two sections: the farming and the urban one.
At the same time they are divided in sites like: check point, the high cemetery and ceremonial rock, the temple of the sun, the Intiwatana, the sacred rock group, the three-window temple, the main temple, tombs, doors, fountains and squares.
PM Take the train to came to Cusco.
Arrive at Poroy Train Station and Transfer to Hotel.

Breakfast,
At proper time transfer to the local airport and departure to regular flight to Lima.

– 02 nights in Hotel.
– 02 Breakfasts.
– Transportation at arrival and departure.
– Excursion to Machupicchu.
– All Tickts (BTU) and entrances.
– Guide all time in English.

Notes: Prices are net and quoted for cash payment in Peru. Names of hotels and standard buses are suggested and subject to availability and if they cannot be got an equivalent service may be provided in a similar hotel or transport means. Some services are subject to climate conditions or local regulations, The order of tours can change in case of exceptional situations like strikes or natural phenomena or any other condition that may change our bringing of the service or may affect passenger s security. All our programs can be modified according to their requirements, may be in duration, interest or specific activities, additional reserves of flights or other destinies specific.