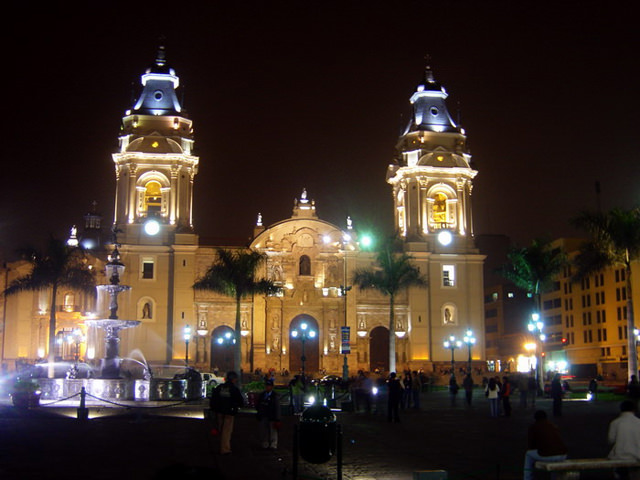 DAY 1: THURSDAY – LIMA PICK UP
Upon arrival reception and transfer to the select hotel – overnight (no meals)

DAY 2: FRIDAY – LIMA CITY TOUR
This tour could start in the morning 9:30 am or 2:30pm. You will be picked up from you hotel. This excursion offers the best combination of the differents attractions in Lima and its three historical periods: pre-hispanic, colonial and contemporary. In Lima, there were several different pre-columbian cultures which are dated thousands of years back. Lima was part of the Inca Empire until was founded by the spaniard Francisco Pizarro on the 18th. of January, 1535. During our guided tour we will travel along its millenary history.
ANCESTRAL LIMA. At the Huaca Pucllana, an archaeological precint build in the IV century A.C., we will have a panoramic view of this magnificent ceremonial and administrative centre which was considered by the Incas a holy village. We will learn about the life and rituals of its ancient inhabitants and admire its typical piramidal building, very characteristic of sacred pre-hispanic edifications which were adored in the coast of Perú.
COLONIAL LIMA. The peruvian Viceroyalty was the most important one in the Spanish Empire and Lima was its capital. The highlights of its historical centre are its architecture and the urban design of the city, found in thold streets filled with colonial houses adorned with moorish-style balconies. Our trip includes the Paseo de la Republica (Promenade of the Republic), Plaza San Martin(San Martin Square) and the Plaza Mayor (Main Square), with their different buildings: Palacio de Gobierno (Government Palace), Palacio Arzobispal the (Archibishop’s Palace), the Basilica Catedral (Cathedral Basilica) and the Palacio Municipal (Municipal Palace). We will enter the monumental Convento de San Francisco (Convent of Saint Francis), which displays the biggest collection of religious art in America. We can admire the Choir Room and the Monks’ Library, the Sacristy, with its collection of Zurbaran and Rivera paintings. The Big Patio of the Main Cloister, decorated with sevillan tyles from the XVI century, its beautiful moorish arches and its subterranean crypts known as The Catacombs, where you will feel the presence of Lima’s colonial past.
CONTEMPORARY LIMA Visit to the most traditional residential areas in the capital: The Olive Grove of San Isidro, Miraflores and Larco Mar, distinctive tourist centre of contemporary Lima.
After the tour transfer to you hotel. Overnight. breakfast included.

DAY 3: SATURDAY – LIMA / CUSCO
You will be picked up from your hotel and transfer to the airport for your flight to Cusco (airfare included) upon arrival reception and transfer to the select hotel, morning at leisure to acclimatize to the altitude. In the afternoon 2;00pm you will be taken on a city tour and visit a local archeological sites, the Cathedral, Koricancha, Sacsayhuaman and surroundings returning later afternoon 5:30pm to your hotel around and enjoy the hospitality of the local people (B).(no meals included).

DAY 4: SUNDAY – SACRED VALLEY (available only on Tuesday, Thursday and Sunday)
After breakfast at 8:45am you will be taken through the Inca Sacred Valley where life has remained almost unchanged for 500 years. You will visit the impressive village of Pisac and the Indian market, enjoy the beautiful handicrafts on sale and wonder at the many ethnic tribal costumes worn, not just for tourists, but as part of their heritage by the local people. The tour also include the visit to Ollantaytambo fortress and the Chinchero Market Before returning to your hotel in Cusco late afternoon (around 6:30pm)(breakfast and Lunch included)

DAY 5: MONDAY – MACHU PICCHU 2days 1 night by train
Early morning 5:30am and after breakfast, we’ll depart to the train station to our journey to Machu Picchu on Vistadome Train. (4 hours) at 9:40am you will arrive to the Aguas Calientes Town from where you will have to take 20 minutes bus to the Archeological site; Once there where you will have a guided tour with an English speaking professional guide follow by some time at leisure, stay overnight in the area or town relax at the nearby hot springs (entrance not included) (breakfast and lunch included)

DAY 6: TUESDAY – MACHU PICCHU – CUSCO
Morning at leisure by your own, you can visit the ruins early next day when the full magnificence of the site reveals itself in all its majesty (entrance and bus fee for this day not included on the rate) return to Cuzco where you will arrive around 7:30pm. (breakfast included)

DAY 7: WEDNESDAY – TRANSFER CUSCO – LIMA / LIMA – QUITO
Pick up from your hotel and transfer to the airport –

QUITO PICK UP
Upon arrival in Quito, reception and transfer to the select Hotel
(Breakfast included) overnight

Departure from Quito or Guayaquil to Baltra (aprox. 2 and half hour flight). Passengers will be picked up at the airport by our guides and taken to the pier to the M/V Galapagos Legend.

Bartolomé
Dry landing. Passengers will see volcanic formations like lava bombs, spatter, and cinder cones. After a hike to the summit you’ll be impressed by the view of the surrounding islands, including the eroded tuff cone of Pinnacle Rock.
During the hike to the summit, travelers will often see colonies of marine iguanas, lava lizards, tiquilla, lava cactus, Scalecia tree and others.
Visitors will be able to snorkel and see the Galapagos penguin, sea turtles, and white tipped sharks from a safe distance.

DAY 9: FRIDAY – URBINA BAY (ISABELA)
Wet landing. Passengers will visit the volcanic ash beach and coral area. Depending on the season you may be able to observe giant tortoises, land iguanas and flightless cormorants. After the walk we will have time for snorkeling.

DAY 10: SATURDAY – SANTIAGO (EGAS PORT)
Wet landing on a beach of dark sand (volcanic ash). Most of the landscape is comprised of layers of rocks and lava flows. Here you can see great blue herons, striated herons, yellow-crowned night herons and American oystercatchers.

Passengers will see marine iguanas grazing upon algae beds alongside red sally light-foot crabs. There is a colony of fur-seals swimming in pools of cool water.
This is a place where you can swim, snorkel and look for squid, starfish and a variety of colorful tropical fish.

Rábida (Jervis)
Wet landing. The volcano-formed beach is dark red and frequented by sea lions. It’s considered the geographic center of Galapagos because it has the most diverse volcanic rocks on the Islands.
You’ll hike to a salt water lagoon, where flamingos can sometimes be found.
July through September is a good time to observe brown pelicans nesting in the salty bushes. Boobies and 9 species of Darwin’s finches can also be observed. You can take a dinghy ride by the reefs, as well as snorkel..

DAY 11: SUNDAY – SANTA CRUZ (CHARLES DARWIN RESEARCH STATION)
Here you will be able to observe the giant tortoises that are part of the reproduction program and the world’s most famous tortoise, Lonesome George, the last surviving specimen of his species.

Visitors can also admire the prickly-pear cactus forest and many land birds. Later on, you’ll have some free time to walk around town and shop for souvenirs.

Santa Cruz (Highlands)
Travelers can trek through the highlands of Santa Cruz and visit Cerro Chato, where you’ll be able to observe the famous giant tortoises in their natural habitat.

Additionally, travelers can walk inside the dormant lava tubes.

DAY 12: MONDAY – SANTA CRUZ (BACHAS BEACH)
Wet landing. This beach is located on north side of Santa Cruz Island.
Here you will encounter many sea birds, marine iguanas, sea turtles, and have the opportunity to swim on the white sand beach.

Return to the Galapagos Legend, check out and transfer to the Baltra’s airport. Return flight to Quito via Guayaquil.

The Galápagos archipelago, with a population of around 40,000, is a province of Ecuador, a country in northwestern South America, and the islands are all part of Ecuador’s national park system. The principal language on the islands is Spanish.

The archipelago has been known by many different names, including the “Enchanted Islands,” because of the way in which the strong and swift currents made navigation difficult. The first crude navigation chart of the islands was done by the buccaneer Ambrose Cowley in 1684. He named the islands after some of his fellow pirates or after the English noblemen who helped the pirates’ cause. More recently, the Ecuadorian government gave most of the islands Spanish names. While the Spanish names are official, many users (especially ecological researchers) continue to use the older English names, particularly as those were the names used when Charles Darwin visited.

The term “Galápagos” refers to the Spanish name given to the Giant Land Tortoises that inhabit the islands, and for which they are particularly known.

The adjective “Galápagan” may be used to describe things from or related to the islands.